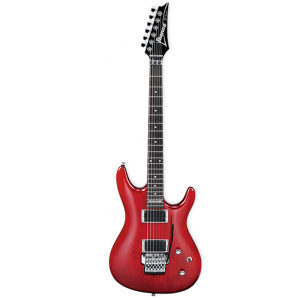 IBANEZ JS100 STORY
The Ibanez JS100 is the JS signature guitar that has been produced for the longest time. Introduced in 1994, and was sold for 20 years until 2014 when the JS140 came up. Indeed, it is the most affordable JS. Compared to its other sisters, it had two Axis humbuckers instead of DiMarzio pickups, medium frets, retained the coil tap that features on every JS guitar but it didn’t have a hi-pass filter. Its neck also had pearly dots like the JS1.The tremolo evolved through the years. It started with a Lo TRS II for 8 years. In 2003 Ibanez factories put an Edge Pro II on it, until in 2007 where the Edge III replaced it and it still features that today.

On the pickups side, it had Ibanez humberckers called Axis Humbuckers, (or AH for those in the know), featured on the AH1 on the neck. It’s made of ceramic and the AH2 on the bridge is an Alnico 5, the same kind of magnet that features on DiMarzio pickups like PAF Pro, PAF Joe, Mo Joe and FRED. This admits a warmer sound and is richer in harmonics.